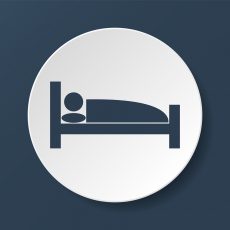 According to a new study, if you’re the type who gets a better night’s rest from wearing a sleep mask and earplugs, you might consider looking into melatonin.

Melatonin is the hormone secreted by the body to regulate sleep, usually in periods of darkness. Synthetically produced melatonin is used to boost the body’s own melatonin levels to treat some sleep disorders, and sometimes as a means of overcoming jet lag. In ICUs, disturbances throughout the night, caused by noise and light, have been linked to slower recovery. This has led clinicians to investigate ways of reducing sleep disturbances.

Researchers from Capital Medical University in Beijing recruited 40 healthy participants to study the effects simulated ICU conditions had on sleep patterns. For the first four nights all participants underwent a baseline/adjustment period. During this time they slept in a sleep laboratory where on alternating nights a recording from a typical night shift at an ICU was played and light levels were the same as in the hospital.

After the first four nights the participants were randomly divided into four equal groups but continued to sleep in the simulated ICU. The first group did not receive any sleep aid. The second were provided with eye masks and earplugs. The third group took 1mg of fast-release oral melatonin when going to bed. The final group of participants was given a placebo.

At the end of the study, it was found that the ICU simulation disturbed the sleep of all of the participants.  However, the participants who used eye masks and earplugs or melatonin slept better.  And, those who took melatonin were found to have decreased awakenings during the night even compared to the eye mask and earplugs group. The quality of the sleep was also found to be much improved for those taking melatonin, with reported lower anxiety levels and increased REM sleep.

Researchers say that while these results are encouraging, more study on a larger group is needed to confirm the results.

Previous:
Boost Your Memory Up to 5X with a Power Nap

Next:
What Companies Can Do to Help Employees Sleep Better