Could Santa’s All-Nighter Be Dangerous? 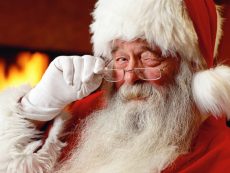 Every year Santa Claus and his team of elves and reindeers stay awake for days and nights so he can deliver presents to children all over the world for Christmas – but he could be putting his and their health at risk. Sleep experts Professor Franco Cappuccio and Dr Michelle Miller, from University of Warwick’s Warwick Medical School, discuss the pros and cons of Santa’s ‘all-nighter’.

Q: Professor, you recently published some research and a new book on sleep deprivation and how it can damage people’s health if they are getting less than six hours sleep a night. Is Santa Claus at risk by staying up all night on Christmas Eve?

A: Considering that he does it only once a year, it may not be too bad for his long-term health. However, in the short term there are risks. Lack of sleep will make him drowsy, his vigilance will fade and his ability to think and remember will diminish. There is risk for himself and others: he could fall asleep at the reins and crash his sleigh, he could even end up delivering the wrong present to the wrong person. So let’s hope he will listen to what we have to say.

Q: Should Santa sleep longer in the run up to the festive period to counter balance the lack of sleep he gets over the Christmas period? Would that work?

A: I doubt Santa would have the time to sleep in preparation for Christmas. I know he and his team are busy going through the lists coming from all over the world, sorting presents and loading his sleigh. I expect they have a few sleepless nights ahead of Christmas Eve too but it would be good for him to be as well rested as possible. Whilst a little nap on a rooftop here and there (no more than 20 minutes) might help in the short-term, it is no substitute for a good 8h night sleep. Santa also has a responsibility towards his most valuable staff, elves and reindeers. My advice would be to recruit more of them so that he could organise a rota with each elf on no more than a 10h shift, with rest and sleep in between. I do realise, however, that it would be impossible to replace Rudolph!

Q: What stimulants could he use to keep himself awake for that long, and avoid falling to sleep at the reins? Are there added health risks attached to using such stimulants?

A: A large cup of coffee (not de-caff please) could be a quick solution for a little while. It will usually have an effect after about 20 minutes, so have a nap before setting off again. Do not rely, however, on repeating this several times. The effect will reduce with time and he may also suffer unpleasant side effects, like palpitations and high blood pressure.

Q: What about the reindeers? Is there any evidence from the animal kingdom that suggests they are also damaging their health by flying all night long?

A: Every single living creature sleeps, and for a reason. However, both the duration and the patterns vary considerably from species to species. In general, wakefulness in animals is a survival function needed to feed and to keep predators away. Deer normally nap during the day and are quite active at night. For Rudolph and his mates, as long as they are well rested beforehand, they should be ready for the long trip night-time around the world.

Q: At each stop it is traditional for families to leave Santa mince pies and alcohol. Will having both of these treats make Santa feel sleepier?

A: Santa will definitely feel hungry after a sleepless night, since sleep deprivation increases appetite, so he appreciates a bit of grub to keep him going. Since sleep debt also leads to obesity, his pot belly is not a surprise to us. Don’t leave him any booze, though! His sleepiness and tiredness already brings his attention to the level of someone who is over the alcohol limit, and there would be a real risk of him crashing his sleigh.

Q: And what would be the best way for Santa to recover after his busy night flying around the world? Is it just a case of sleeping for the whole of Christmas Day and Boxing Day?

A: Surely Santa will feel jet-lagged at the end of his trip! To deliver presents at exactly mid-night all around the world he will have to spend 24h in trans-meridian travel with rapid changes in time zones and little time for his body clock to adapt. He will travel in darkness all the time, so he will be more likely to fall asleep. Catch-up sleep helps to recover from the short-term tiredness and fatigue, but will not help avoid the long-term consequences of sleep deprivation. If he were to do this all year round, he would definitely run the risk of dying prematurely. However, children be reassured: he only does it once a year for us all, and by following my instructions he will remain fresh and zippy!

Source: The University of Warwick