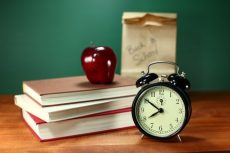 It seems like the topic comes up every year at the end of summer vacation, and this year is no exception.  Experts continue to come out year after year, saying schools should start later.

Speaking at the British Science Festival in Bradford on Tuesday, Paul Kelley of the Sleep and Circadian Neuroscience Institute at the University of Oxford said that putting an end to early school starts would “improve the lives of a generation”.  He said students are losing an average of 10 hours of sleep per week due to early starts to their day, making them more sleep-deprived than a junior doctor on a 24-hour shift.

The continued push for later school starts is due to a better understanding of circadian rhythms.  Nearly everyone knows a teen who is happy to sleep until noon when allowed.  It turns out, that’s not due to laziness or merely wanting to stay up late.  The reason has to do with biology.

In research begun in the 1970s at Stanford University, scientists documented a change in the timing of the biological clock at puberty, marked by a delay in nocturnal melatonin secretion. Melatonin is a hormone that helps regulate our body clocks.  Because of the delay in melatonin secretion, teenagers’ internal clocks prompt them to stay awake approximately two hours later than younger children. The research also found the homeostatic sleep drive changes in adolescence, making it easier for teenagers to stay awake for more hours than younger children can manage.

Next:
With Nature Comes Better Sleep for Some