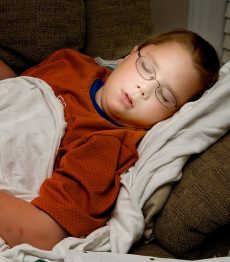 Many parents of children with ADHD say their children have more difficulty falling asleep and staying asleep than other children.  A new study from Aarhus University in Denmark is backing up that claim.

Studies have shown that up to 70 percent of parents of children with ADHD report that the children have difficulty falling asleep and that they spend a long time putting them to bed. However, scientific studies that measure sleep quality using electrodes have so far failed to demonstrate a correlation between sleep quality and ADHD. But a new Danish study now shows that children with ADHD actually do sleep worse than other children:

“Our study will confirm what many parents have experienced, which is that children with ADHD take longer to fall asleep at night. With our measurements we can also see that these children experience more disturbed sleep including less deep sleep. If you only look at length of sleep, children in the ADHD group sleep for 45 minutes less than children in the control group,” says PhD from Aarhus University and medical doctor at the Child and Adolescent Psychiatric Hospital, Risskov, Anne Virring Sørensen, who is behind the PhD study.

Two out of three children with ADHD have one or more additional psychiatric diagnoses in addition to ADHD, which probably increases the risk of sleep disturbance. But even when the researchers look at the children who have only been diagnosed with ADHD, they see a big difference in the sleep patterns of the control group and the ADHD group.

“Unlike in the evening we could see that there was a tendency for the children with ADHD to fall asleep faster during the day than the children in the control group. This is somewhat surprising when you take into account that ADHD is associated with characteristics such as hyperactivity. But this hyperactivity could be compensatory behaviour for not being able to doze off during the day” says Anne Virring Sørensen.

The fact that researchers have not previously been able to demonstrate a correlation between ADHD and poorer sleep could be due to different measuring methods.

Many children with ADHD are currently given medicine to help them fall asleep. Anne Virring Sørensen emphasises that none of the children received medicine while taking part in the study.