Do You Sleep What You Eat? 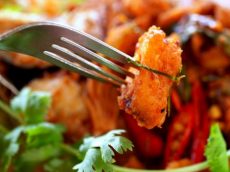 There’s been a lot of talk in the last few years about how sleeping less can help you gain weight, whether you’re trying to gain weight or not.  A new study, however, found some interesting results looking at the reverse: how much your diet impacts your sleep.

Researchers at the Perelman School of Medicine at the University of Pennsylvania looked at existing data that showed how much sleep subjects in a study received, and exactly what they ate during the day.  For purposes of categorization, very short sleep patterns were defined as less than five hours a night, short sleep was five to six hours a night, standard sleep was 7 to 8 hours, and long sleep was nine or more hours a night.

It turns out that people in the different sleep categories also had distinct diet patterns. Short sleepers consumed the most calories, followed by normal sleepers, then very short sleepers. Long sleepers consumed the least calories. Normal sleepers, however, showed the highest food variety in their diets, and very short sleepers had the least variation in what they ate. A varied diet tends to be a marker for good health since it includes multiple sources of nutrients.

Next:
Is Rest Getting Trendy?