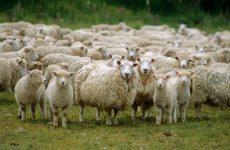 It’s okay to count these guys to the left right now, but don’t count any more tonight when you’re trying to get to sleep.  A recent article in the New York Times says scientists have actually debunked the myth that counting sheep will help you fall asleep.  Researchers at Oxford University gathered a bunch of insomniacs and monitored them while they tried different techniques to fall asleep…

What they found was that subjects took slightly longer to fall asleep on nights they were instructed to distract themselves by counting sheep or were given no instructions at all. But when they were told to imagine a relaxing scene — a beach, for example — they fell asleep an average of 20 minutes sooner than they did on other nights. Counting sheep, the scientists suggested, may simply be too boring to do for very long, while images of a soothing shoreline or tranquil stream are engrossing enough to concentrate on.

Similar tests were done with people who didn’t normally have trouble falling asleep … with similar results.

Next:
Babies Learn Better When They Sleep