Evening Exercise Won’t Ruin Sleep and Has Side Benefits 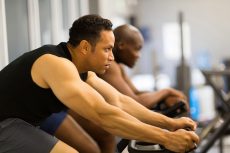 With growing time demands, many middle-aged adults are finding time to engage in exercise increasingly difficult. For many, even the thought of fitting exercise in after a busy day at work can be as tiring as it is unappetizing. The standing belief that high-intensity exercise should be avoided in the early evening due to its effect on sleep only serves to act as another barrier to exercise.

However, encouraging new research has suggested that 30 minutes of high-intensity exercise performed in the early evening does not negatively affect subsequent sleep, and may also actually keep you from eating as much.

The results not only showed that evening exercise did not have a detrimental impact on subsequent sleep, but also that afternoon and evening high-intensity exercise were associated with greater reductions of the hunger stimulating hormone, ghrelin. It is important to note that a single bout of exercise was not linked to reduced hunger, but nevertheless, the observations from this study support high-intensity exercise early in the evening as a viable time-of day for exercise.

As this study’s sample size was relatively small, the findings extrapolated to other population groups beyond middle-aged men may be limited, given that sleep and appetite regulation are influenced by sex and age.

“In the future, we hope to conduct similar studies recruiting women, to determine whether sleep and appetite responses may be different depending on sex, said Penelope Larsen, the study’s lead author.