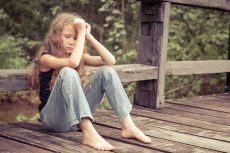 Children who experience inadequate or disrupted sleep are more likely to develop depression and anxiety disorders later in life.  That’s according to new research conducted at the Sleep and Anxiety Center of Houston (SACH).

Funded by a grant from the NIH’s National Institute of Mental Health (NIMH), the study sought to determine the precise ways inadequate sleep in childhood produces elevated risk for emotional disorders in later years.

“In particular, we are interested in understanding how children appraise, express, regulate and later recall emotional experiences, both when sleep is adequate and when it is inadequate,” said Candice Alfano, a clinical psychologist and principal investigator of the study. “We focus on childhood, because similar to problems with anxiety and depression, sleep habits and patterns develop early in life and can be enduring.”

Alfano and co-investigator Cara Palmer, who is a postdoctoral fellow at SACH, are identifying distinct emotional processes that, when disrupted by poor sleep, make children vulnerable to developing anxiety and depression. To pinpoint these cognitive, behavioral and physiological patterns of emotional risk, they are temporarily restricting sleep in 50 pre-adolescent children between the ages of 7 to 11.

Their findings reveal that inadequate sleep impacts children’s emotional health not only by creating more negative emotions, but also by altering positive emotional experiences. For example, after just two nights of poor sleep, children derive less pleasure from positive things, are less reactive to them and less likely to recall details about these positive experiences later. When their normal nightly sleep habits are adequate in duration, however, they’re finding these emotional effects are less apparent.

“Healthy sleep is critical for children’s psychological well-being,” Alfano said. “Continually experiencing inadequate sleep can eventually lead to depression, anxiety and other types of emotional problems. Parents, therefore, need to think about sleep as an essential component of overall health in the same way they do nutrition, dental hygiene and physical activity. If your child has problems waking up in the morning or is sleepy during the day, then their nighttime sleep is probably inadequate. This can result for several reasons, such as a bedtime that is too late, non-restful sleep during the night or an inconsistent sleep schedule.”

Alfano says studying the link between sleep disruption and maladaptive emotional processing in childhood is essential, because that’s when sleep and emotion regulatory systems are developing. The increased need for sleep and greater brain plasticity during childhood suggests this to be a critical window of opportunity for early intervention. The combined societal costs of anxiety and depressive disorders are estimated to be more than $120 billion annually, underscoring the need for early identification of risk factors and effective intervention methods. Previous:
Sleep With a Chicken to Avoid Malaria

Next:
Electric Brain Stimulation During Sleep Can Boost Memory