Learning While You Sleep May Be Possible 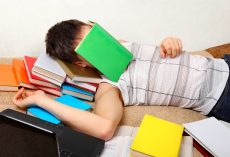 It turns out your brain may be more “awake” while you’re sleeping than previously thought.

Researchers in France and England recently teamed up to study the processing capacity of sleeping brains. The researchers used a simple word test, having participants use a hand signal device to categorize the given word as being either an animal or an object.

By attaching each participant to an EEG and recording neural impulses, researchers were able to tell when the word game had become automatic. Once the word-categorization process had become automatized by the brain, researchers had the participants perform the same test — only using different words — in a reclined chair in a dark room. They found that the participants performance did not decline has each one drifted off to sleep.

The scientists say this proves that large portions of our brains don’t simply shut down while we’re sleeping.  Further, they say it explains some everyday life experiences such as our sensitivity to our name in our sleep, or to the specific sound of our alarm clock, compared to equally loud but less relevant sounds.

Researchers hope to do further testing to find out what their discovery might say about the ability to learn while sleeping.  However, researchers caution that interrupting sleep in any way, even if we’re not aware of the interruption, could potentially have health ramifications.