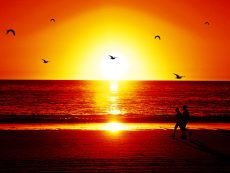 Myth or Truth:  The body’s internal clock is set to 24 hours and would be synchronized perfectly with sunrise and sunset if it weren’t for interference from electric lights.

Multiple studies have actually pointed toward humans having a longer body clock than the typical 24-hour day. In fact, if left to our own devices (i.e. without outside stimuli like daylight and darkness) we would follow a 25-hour day. Fortunately we have light (both real and artificial) to keep us on track.  There are several sleep disorders related to your body’s clock running slow or fast.  This article from Everyday Health charts a couple of them:

Advanced Sleep Phase Disorder (ASPD) affects about 1 percent of adults — a higher percentage of seniors — and results in these people going to bed earlier and waking up earlier than what is typically considered normal. For example, individuals with ASPD may go to sleep between 6 p.m. and 9 p.m. and wake up anywhere from 1 a.m. to 5 a.m. During the time they are asleep, they generally get good-quality shut-eye.

Delayed Sleep Phase Syndrome (DSPS) is much more common, with as many as 15 percent of teens and adults reportedly having it. The opposite of Advanced Sleep Phase Disorder, those with DSPS go to bed in the early morning, between 1 a.m. and 4 a.m., and wake up later, ranging from 8 a.m. to 11 a.m. While these extreme night owls still sleep well, they are at risk of sleep deprivation if they must force their bodies to wake up before they are ready to in order to accommodate school and work schedules.

If you find that your body clock is a little off due to preferring to stay up late, some researchers believe they have a cure.  Read more in an article published on SleepBetter about how camping can be a cure for the common night owl.