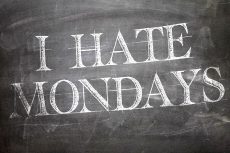 Monday mornings could be harmful to your health.

Many of us, particularly those who work overnights or “shift work,” keep a very different schedule on the weekends than during the week.  New research published in the Endocrine Society’s Journal of Clinical Endocrinology & Metabolism, says, however, that sleep changes like that may raise the risk of developing metabolic problems such as diabetes and heart disease.

Researchers have long recognized that shift work can contribute to metabolic risk because of the continual disruption to the circadian system. Shift workers are more likely to develop metabolic syndrome, coronary heart disease and Type 2 diabetes than employees with regular daytime shifts.

Sleep disruption is among the factors that have contributed to rising rates of diabetes and obesity. More than 29 million Americans have diabetes, and 35.1 percent of American adults are obese.

“Social jetlag refers to the mismatch between an individual’s biological circadian rhythm and their socially imposed sleep schedules. Other researchers have found that social jetlag relates to obesity and some indicators of cardiovascular function,” said Patricia M. Wong, MS, of the University of Pittsburgh in Pittsburgh, PA. “However, this is the first study to extend upon that work and show that even among healthy, working adults who experience a less extreme range of mismatches in their sleep schedule, social jetlag can contribute to metabolic problems. These metabolic changes can contribute to the development of obesity, diabetes and cardiovascular disease.”

Researchers examined sleep patterns and cardiometabolic risk in a group of 447 men and women who took part in the Adult Health and Behavior Project Phase 2 study. The participants were between the ages of 30 and 54, and they worked at least 25 hours a week outside the home. Participants wore a wristband that measured their movement and sleep 24 hours a day for a week. The researchers used questionnaires to assess the participants’ diet and exercise habits.

Participants who had a greater misalignment between their sleep schedules on free and work days tended to have poorer cholesterol profiles, higher fasting insulin levels, larger waist circumference, higher body-mass index and were more resistant to insulin than those who had less social jetlag. The association persisted even when the researchers adjusted the measurements to account for variation in other sleep measures and health behaviors such as physical activity and calorie intake.

“If future studies replicate what we found here, then we may need to consider as a society how modern work and social obligations are affecting our sleep and health,” Wong said. “There could be benefits to clinical interventions focused on circadian disturbances, workplace education to help employees and their families make informed decisions about structuring their schedules, and policies to encourage employers to consider these issues.” I Hate Mondays written on blackboard

Next:
ADHD Medication Can Equal Sleep Trouble for Kids