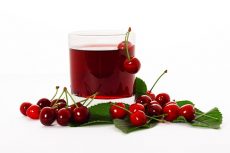 The idea that cherry juice can fight insomnia is not a new one, but more research is out recently that points to its effectiveness.

These findings were presented recently at the annual meeting of the American Society of Nutrition. The findings have been submitted for publication in a peer-reviewed journal.

Insomnia is a common health problem among older adults, impacting an estimated 23 to 34 percent of the population ages 65 and older. Insomnia – defined as trouble sleeping on average more than three nights per week – can be an annoyance for some, but long-lasting sleeplessness can seriously affect health, especially in the elderly.

For the randomized crossover clinical trial, seven older adults with insomnia and an average age of 68 consumed eight ounces of tart cherry juice twice daily for two weeks. Researchers then recorded the subjects’ slumber in a controlled setting, using overnight polysomnography to evaluate sleep efficiency, such as sleep onset and duration. Participants also completed questionnaires related to sleep, fatigue, depression and anxiety. Additionally, blood work was conducted on each participant.

The researchers found that those who drank the Montmorency tart cherry juice in the morning and at night were able to sleep more than an hour longer each night (averaging 84 minutes) compared to the placebo, and their sleep tended to be more efficient.

They believe the ruby red pigments in tart cherry juice, known as proanthocyanidins, also play a role. These natural polyphenolic compounds are especially abundant in Montmorency tart cherries. In the study, tart cherry juice helped to increase the availability of tryptophan, an essential amino acid and a precursor to serotonin that helps with sleep.  The juice was shown in cells to inhibit an enzyme (indoleamine 2,3 dioxygenase) that degrades tryptophan. Tryptophan degradation is a known predictor of insomnia and is also related to inflammation, said co-authors Jack Losso and John Finley, professors in the School of Nutrition and Food Sciences at Louisiana State University Agricultural Center.