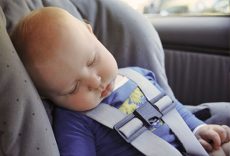 New research warns that if your baby isn’t in the car, he or she shouldn’t be sleeping in a car seat.

A study from Auckland University in New Zealand has found a link between car safety seats and decreased oxygen levels, as babies’ heads slump forward when they fall asleep in the seats.

The researchers studied breathing patterns of babies sleeping in a car safety seat, with and without a foam plastic insert.

The foam plastic insert, designed to allow the infant’s head to rest in a neutral position in sleep, is already available commercially.

Next:
Beauty Rest: Skin Ages More When You Don’t Sleep