Newly Discovered “Short Sleep” Gene Has a Side Benefit 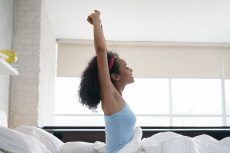 The scientists who identified the two known human genes that promote “natural short sleep” — nightly sleep that lasts just four to six hours but leaves people feeling well-rested — have now discovered a third, and it has some side benefits.

Researchers at University of California San Francisco say that third gene is the first that’s ever been shown to prevent the memory deficits that normally accompany sleep deprivation. The researchers believe this latest discovery may one day lead to a druggable target for therapies that improve sleep and treat sleep disorders.

The findings were announced just weeks after the same team reported their discovery of the second short sleep gene, an achievement that was a decade in the making.

“Ten years ago, when we identified the first short sleep gene, the field of sleep genetics was in its infancy. People didn’t think that genes could significantly influence sleep behaviors, and big breakthroughs were rare. Today the field is advancing much more rapidly, and we’re beginning to get a better picture of how important your genes are to getting a good night’s sleep,” said Ying-Hui Fu, PhD, a professor of neurology at UCSF who has led the research teams that identified all three known short sleep genes.

Fu and her team identified the newest gene in a father-and-son pair who averaged just 5.5 and 4.3 hours of sleep each night, respectively — far less than the seven to nine hours that most people need in order to avoid feeling sleep-deprived.

“There are serious health consequences associated with sleep deprivation,” said Louis Ptáček, MD, professor of neurology at UCSF and co-senior author of the new study. “People who are chronically sleep deprived are more likely to suffer from obesity, diabetes, cardiovascular problems, depression and cognitive deficits.”

But like other natural short sleepers, the father-son pair don’t seem to experience any of the adverse cognitive or physical effects that generally accompany sleep deprivation. Fu and Ptáček wanted to know why.

The researchers performed gene sequencing on both father and son, and zeroed in on a single-letter mutation in a gene called NPSR1, which encodes a signaling protein that sits on the surface of neurons and was previously shown to be involved in regulating sleep. Like the mutations in the other known short sleep genes, this mutation is exceedingly rare, occurring in fewer than one in 4 million people.

“Not only does this discovery provides us with a better understanding of how genes contribute to an unusual sleep phenotype, it also offers up an appealing target for future therapies that may help treat sleep disorders or prevent certain cognitive deficits associated with lack of sleep,” Ptáček said.