One in Three Older Adults Use Sleeping Pills 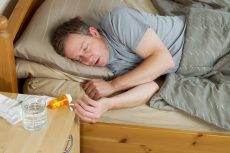 Sleep doesn’t come easily for nearly half of older Americans, and more than a third have resorted to some sort of medication to help them doze off at night, according to new results from the National Poll on Healthy Aging.  What’s just as bad is that most of them haven’t discussed their sleep troubles with their doctors.

The poll was conducted by the University of Michigan Institute for Healthcare Policy and Innovation, and is sponsored by AARP and Michigan Medicine, U-M’s academic medical center.

Those who turn to medications may not realize that prescription, over-the-counter and even “natural” sleep aids carry health risks, especially for older adults, either alone or in combination with other substances. In fact, national guidelines strongly warn against prescription sleep medicine use by people over age 65.

Despite this, the nationally representative poll of people ages 65 to 80 finds that 8 percent of older people take prescription sleep medicine regularly or occasionally. Among those who report sleep troubles three or more nights a week, 23 percent use a prescription sleep aid. Most who use such drugs to help them sleep had been taking them for years. Manufacturers and the U.S. Food and Drug Administration say such drugs are only for short-term use.

“Although sleep problems can happen at any age and for many reasons, they can’t be cured by taking a pill, either prescription, over-the-counter or herbal, no matter what the ads on TV say,” says poll director Preeti Malani, M.D., a U-M physician trained in geriatric medicine. “Some of these medications can create big concerns for older adults, from falls and memory issues to confusion and constipation,” even if they’re sold without a prescription.

“The first step for anyone having trouble sleeping on a regular basis should be to talk to a doctor about it,” she continues. “Our poll shows that nearly two-thirds of those who did so got helpful advice – but a large percentage of those with sleep problems simply weren’t talking about it.”

She notes that non-medication-based sleep habits are the first choice for improving sleep in older people.

Previous:
You Don’t Need a Brain to Sleep

Next:
A Link Between Sleep, Cognition, and Schizophrenia