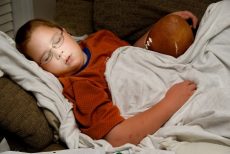 A new study conducted among more than 177,000 students suggests that insufficient sleep duration is associated with an unhealthy lifestyle among children and adolescents.

“Approximately 40 percent of schoolchildren in the study slept less than recommended,” said senior author Labros Sidossis, PhD, from of the Department of Kinesiology and Health at Rutgers University. “Insufficient sleeping levels were associated with poor dietary habits, increased screen time and obesity in both genders.”

“The most surprising finding was that aerobic fitness was associated with sleep habits,” said Sidossis. “In other words, better sleep habits were associated with better levels of aerobic fitness. We can speculate that adequate sleep results in higher energy levels during the day. Therefore, children who sleep well are maybe more physically active during the day and hence have higher aerobic capacity.”

The authors noted that the results support the development of interventions to help students improve sleep duration.

Next:
Sleep Better and You Will Fall Less