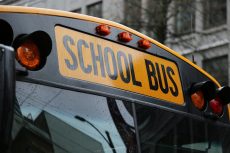 There has been a lot of talk about early school start times for high schoolers, and how adolescence leads to the students’ bodies pushing them to stay up later.  But, what about middle schoolers?  A new study says the findings are very similar to their older counterparts.

Researchers looked at nearly 33,000 middle school students in Washington D.C., and found that 60% get less than nine hours of sleep.  The recommended amount of sleep for children that age is eight to 10 hours.  Chronic insufficient sleep in adolescence has been linked to cardiovascular, metabolic, and immune disorders in later life. There are also psychological effects that can range from sleep walking to depression and suicidal thoughts.

The students were then split up based on their school start times, and the results were predictable.  Students who went to schools with earlier starts time tended to report less sleep duration, less completed homework, and lower grades.

Studies assessing the link between school start times, sleep duration, and their impact on academic performance have been going on since the 1960s, but it is only recently that this area of research has received public attention.

Previous:
Find a Purpose in Life for Better Sleep

Next:
How to Get More Infants “Back to Sleep”