Science Can Now Turn Your Dreams On or Off 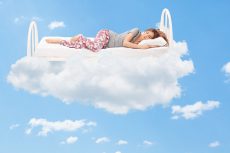 At the flip of a switch, University of California, Berkeley, neuroscientists can send a sleeping mouse into dreamland.

The researchers inserted an optogenetic switch into a group of nerve cells located in the ancient part of the brain called the medulla, allowing them to activate or inactivate the neurons with laser light.

When the neurons were activated, sleeping mice entered REM sleep within seconds. REM sleep, characterized by rapid eye movements, is the dream state in mammals accompanied by activation of the cortex and total paralysis of the skeletal muscles, presumably so that we don’t act out the dreams flashing through our mind.

Deactivating the neurons reduced or even eliminated a mouse’s ability to enter REM sleep.

“People used to think that this region of the medulla was only involved in the paralysis of skeletal muscles during REM sleep,” said lead author Yang Dan, a UC Berkeley professor of molecular and cell biology and a Howard Hughes Medical Institute Investigator. “What we showed is that these neurons triggered all aspects of REM sleep, including muscle paralysis and the typical cortical activation that makes the brain look more awake than in non-REM sleep.”

While other types of neurons in the brainstem and hypothalamus have been shown to influence REM sleep, Dan said, “Because of the strong induction of REM sleep – in 94 percent of the recorded trials our mice entered REM sleep within seconds of activating the neurons – we think this might be a critical node of a relatively small network that makes the decision whether you go into dream sleep or not.”

The UC Berkeley team reported their results in the most recent issue of the British journal Nature.

The discovery will not only help researchers better understand the complex control of sleep and dreaming in the brain, but will allow scientists to stop and start dreaming at will in mice to learn why we dream.

Next:
Maybe Our Ancestors Didn’t Sleep More Than Us