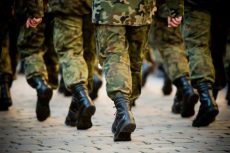 A new study found a six-fold increase in the prevalence of any sleep disorder diagnosis among U.S. veterans. The largest increases were identified in patients with post-traumatic stress disorder (PTSD), other mental disorders, or combat experience. Results also show that the prevalence of PTSD tripled during the study period.

Study results are published in the July issue of the journal Sleep.

“Veterans with PTSD had a very high sleep disorder prevalence of 16 percent, the highest among the various health conditions or other population characteristics that we examined,” said Principal Investigator and senior author James Burch, PhD, Associate Professor in the Department of Epidemiology and Biostatistics in the Arnold School of Public Health at the University of South Carolina. “Because of the way this study was designed, this does not prove that PTSD caused the increase in sleep disorder diagnoses,” noted Burch, who also is a Health Science Specialist at the WJB Dorn Department of Veterans Affairs Medical Center in Columbia, South Carolina. “However, we recently completed a follow-up study, soon to be submitted for publication, that examined this issue in detail. In that study, a pre-existing history of PTSD was associated with an increased odds of sleep disorder onset.”

According to the American Academy of Sleep Medicine, sleep apnea is a sleep-related breathing disorder characterized by abnormalities of respiration during sleep. The most common form of sleep apnea is obstructive sleep apnea, which is characterized by repetitive episodes of complete or partial upper airway obstruction occurring during sleep. Insomnia involves a frequent and persistent difficulty initiating or maintaining sleep that results in general sleep dissatisfaction and daytime impairment.

The study population consisted of all U.S. veterans seeking care in the Veterans Health Administration system between FY2000 and FY2010. Of the total sample of 9,786,778 veterans, 93 percent were men, and 751,502 were diagnosed with at least one sleep disorder.

Next:
Try the Cognitive Shuffle for Quicker Sleep