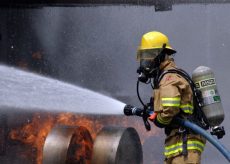 Firefighters are the first to rush into a burning building to save a life.  They don’t think about it … they just do it.  One of the downsides of being a firefighter, other than the risk of fire, is the very strange hours you’re sometimes forced to work.  The odd sleep schedule required for the job can sometimes lead to health problems, but a new study aims to reduce that risk.

Many firefighters suffer acute and chronic sleep deficiency and misalignment of their circadian rhythm (body clock) due to extended shifts and long work weeks. Extended duration shifts have been shown to increase the risk of sleepiness, burnout, injuries and errors when compared to shorter shifts in resident physicians and first responders such as emergency medical technicians. Many firefighters also suffer from undiagnosed sleep disorders which further increase risk to short-term safety and long-term health.

To test the hypothesis that a workplace-based Sleep Health Program (SHP) would improve firefighter health and safety compared to standard practice, researchers at Brigham and Women’s Hospital developed an SHP incorporating sleep health education and sleep disorder screening. Half of the stations in the mid-sized fire department received the program and half continued as normal, and then disability days, injuries and other measures were tracked for the next 12 months. It is the first randomized prospective trial to demonstrate a recuction in risk of injury and disability through implementation of an SHP.

Findings of the study showed a nearly 50 percent reduction in long term disability days among those who participated in the SHP, and firefighters who attended sleep health education sessions also showed reduction in risk of injury. The study is published online in the journal SLEEP.

“Our findings suggest that a firefighter workplace-based wellness program providing sleep health education and sleep disorders screening opportunity can reduce injuries and subsequent work loss due to disability in firefighters,” stated Steven W. Lockley, PhD, neuroscientist in the Division of Sleep and Circadian Disorders at Brigham and Women’s Hospital and senior author of the study. “The high prevalence of sleep disorders is comparable to that reported in our larger nationwide cohort study and, when coupled with other factors such as 24-hour shifts and chronic sleep deficiency, on-the-job sleepiness becomes a concern. Our program was shown to help reduce injuries and days off due to disability and should be considered for implementation by fire departments nationwide”.

Researchers emphasize that there is a well established connection between untreated sleep disorders and a high risk of cardiovascular disease and metabolic disorders, as well as a high risk of drowsy driving crashes, and therefore programs to identify and treat these disorders are likely to be beneficial to both firefighters’ short-term safety and long-term health. They also state that occupational health programs provide a great infrastructure through which sleep health education and sleep disorders diagnosis and treatment can be promoted.

Next:
What is Good Sleep?