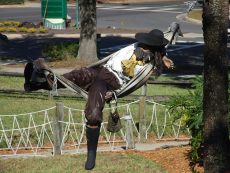 Today is International Talk Like a Pirate Day!  To celebrate, we at SleepBetter.org of course have said “Yaarrrrr!” a few times, but more importantly it gives us an opportunity to talk about a great idea — sleeping like a pirate!

Back in the day, pirates, of course, didn’t have a lot of room for traditional beds.  So, they used hammocks strung between masts or poles in their ship.  It turns out, this is a really great way to sleep.  Here’s some information from an article we published this summer called Hammocks Lead to Better Sleep that talked about an actual scientific study about sleeping in hammocks:

This study published in Current Biology found that people fell asleep faster and into a deeper sleep than they would in a stationary bed. Twelve male volunteers were subjects of this study and were asked to take naps in a hammock. One nap consisted of a rocking hammock and during the other nap the hammock remained still.

After looking into the subject’s brain activity, it was found that the rocking motion of the hammock was the reason for the better sleep of the study participants. The researchers are still looking into why the rocking motion is conducive to better sleep and have a second study already in the works.  They recognized that babies almost always benefit from motion to help them sleep, but the connection of motion and sleep in regards to adults has not been studied in depth.

So, while everyone is talking like a pirate today, perhaps you should try SLEEPING like a pirate .. and sleeping better because of it!

Previous:
Sleep is as Important as Studying for School-Aged Kids