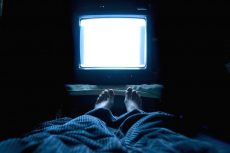 Sleeping with a television or light on in the room may be a risk factor for gaining weight or developing obesity, according to scientists at the National Institutes of Health. The research is the first to find an association between any exposure to artificial light at night while sleeping and weight gain in women. The results suggest that cutting off lights at bedtime could reduce women’s chances of becoming obese.

The research team used questionnaire data from 43,722 women. The participants, aged 35-74 years, had no history of cancer or cardiovascular disease and were not shift workers, daytime sleepers, or pregnant when the study began. The study questionnaire asked whether the women slept with no light, a small nightlight, light outside of the room, or a light or television on in the room.

The scientists used weight, height, waist and hip circumference, and body mass index measurements taken at baseline, as well as self-reported information on weight at baseline and follow-up five years later. Using this information, the scientists were able to study obesity and weight gain in women exposed to artificial light at night with women who reported sleeping in dark rooms.

The results varied with the level of artificial light at night exposure. For example, using a small nightlight was not associated with weight gain, whereas women who slept with a light or television on were 17% more likely to have gained 5 kilograms, approximately 11 pounds, or more over the follow-up period. The association with having light coming from outside the room was more modest.

Also, the scientists wondered if not getting enough rest factored into the findings.

“Although poor sleep by itself was associated with obesity and weight gain, it did not explain the associations between exposure to artificial light while sleeping and weight,” said corresponding author Dale Sandler, Ph.D.

The authors acknowledge that other confounding factors could explain the associations between artificial light at night and weight gain. However, their findings did not change when analyses controlled for characteristics that may be associated with exposure to light at night. These factors included age, having an older spouse or children in the home, race, socioeconomic status, calories consumed, and physical activity. Also, the study did not include men.

“Unhealthy high-calorie diet and sedentary behaviors have been the most commonly cited factors to explain the continuing rise in obesity,” Park said. “This study highlights the importance of artificial light at night and gives women who sleep with lights or the television on a way to improve their health.”

Previous:
How to Train Yourself to Become an Early Bird

Next:
Poor Sleep and Poor Nutrition May Be Linked