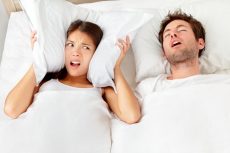 It’s a common belief that individuals who snore are usually tired the next day.  But, new research suggests snoring does not lead to a bad night’s sleep, at least not for the person doing the snoring.

Scientists did some myth busting with a study of 74 people.  Volunteers had a device containing a small microphone strapped to their face to record how often they snored. The next day, they were all asked to rate how sleepy they felt. Results showed those who snored a lot were no more tired than other participants. Snoring also did not affect how many hours they slept or how often they woke up.

The researchers from Toronto Rehabilitation Institute in Canada did not include individuals with obstructive sleep apnea (OSA), but rather everyday typical snorers.  OSA causes you to temporarily stop breathing when you are asleep, and snoring is one symptom.

Lead researcher Hisham Alshaer said snoring ‘is not related to poor sleep structure or subjective sleepiness, as long as the person does not have sleep apnea’.

The Canadian researchers say there has generally been a lack of research into simple snoring, affecting an estimated 30-percent of the population.

Next:
REM Sleep is a Time for the Brain to Forget