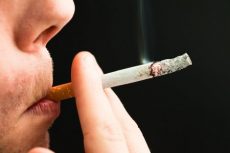 Here’s one more reason to keep your New Year’s resolution to quit smoking.  Researchers at the University of Rochester have learned that quitting will help you sleep better.

The study, published in the FASEB Journal, found that smoking can decrease levels of a molecule (SIRTUIN 1, an anti-aging molecule) which in turn alters the levels of a protein controlling the body clock.  They made this discovery using two groups of mice placed in smoking chambers for short-term and long-term tobacco inhalation. One of the groups was exposed to clean air only and the other was exposed to different numbers of cigarettes during the day. Researchers monitored their daily activity patterns and found that these mice were considerably less active following smoke exposure.

Further results suggest that the body clock protein, BMAL1, was regulated by SIRT1, and the decrease in SIRT1 resulted in a disturbance in the sleep cycle/molecular clock in mice and human smokers.

It may seem complicated, but in the end all you need to know is that smoking ruins productive sleep, leading to cognitive dysfunction, mood disorders, depression and anxiety.

Previous:
Could a Pacemaker Work for Sleep Apnea?

Next:
Study: Night Shift Throws Your Body Off Kilter