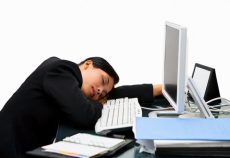 A new study found that specific psychological and social work factors were associated with sleep problems.  To make it worse, the study indicated that the impact of those work factors may negatively affect sleep for up to two years.

The results of the research, which was conducted in Norway,  show that quantitative job demands, decision control, role conflict and support from a superior in the workplace were the most consistent predictors of troubled sleep, which was characterized by difficulty initiating sleep or disturbed sleep.

“Apart from raising a general awareness of the significance of these factors for health and well-being, the results should be directly applicable in practical efforts to target sleep problems among employees,” said lead author Jolien Vleeshouwers from the National Institute of Occupational Health in Oslo. “Since these work factors are relatively specific and modifiable, intervention programs may be developed to target employees’ appraisal of these work factors in order to improve sleep, which could in turn have an effect on health, sickness, absence and productivity.”

Study results are published in the April issue of the journal Sleep.

The study involved Norwegian employees from 63 different companies, covering a wide variety of jobs. Prospective analyses comprised a sample of 5,070 participants who completed web-based questionnaires at baseline and approximately 2 years later. Subjects were asked how many times in the past 4 weeks they experienced “difficulties falling asleep” and “disturbed sleep.” The General Nordic Questionnaire for Psychological and Social Factors at Work was used to explore factors such as:

According to the authors, the results state that negative health effects may result from a combination of high job demands and low job control.

Previous:
Why You Don’t Sleep Well in Hotel Rooms

Next:
Scientists Working to Unlock the Mysteries of the Body Clock