Technology in the Bedroom Equals Poor Sleep and Poor Grades 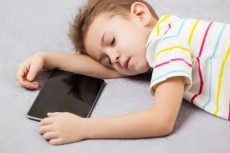 More than a third of elementary school children are failing to get sufficient sleep, and the consequences are significant.  A new study has linked poor sleep with difficulties in paying attention in class, keeping up with school work, forgetfulness and absenteeism.

Children of that age should get 10 hours sleep per night. The study, conducted by the University of Leeds in the UK, discovered that out of 1,100 children aged six to 11, 36-percent were getting eight hours or less sleep on a weekday night.  One in seven were getting seven hours or less a night.

The researchers found links between poor sleep and children having access to mobile phones or computer devices in their bedroom. They say parents should consider removing technology from their children’s bedrooms.

The study was designed to provide an insight into the sleeping patterns of young children in the UK, an area that has previously received little attention from scientists.

The study’s lead researcher, psychologist Dr Anna Weighall, set out to assess the use of technology such as mobile phones, tablets and computers in the run up to bedtime, the availability of technology in the bedroom, and what impact that was having on children’s sleep.

The researchers identified that children who had access to technology in their bedroom were more likely to experience a shorter night’s sleep. One in 3 parents (34%) reported that their children use a smart phone, tablet, or other electronic device in the hour before bedtime, and many children sleep with ready access to electronic devices.

“Where parents are able to encourage their children not to have technology in the bedroom at all, the sleep outcomes are much better.”

It’s not known what might be causing that effect but Dr Weighall has a number of theories. She said that scientists know that the light from a screen excites the brain, making it harder for those children who are using their phone in the run up to bedtime or in bed, to switch off. Unable to sleep, they could also get themselves locked in a vicious cycle of further technology use.

Dr Weighall added: “It is conceivable that if a child can’t sleep, they are more likely to pick up their phone.”

Next:
For Seniors, Sleep Medications Increase the Risk of Falling