Too Much or Too Little Sleep Could Equal Diabetes in Men 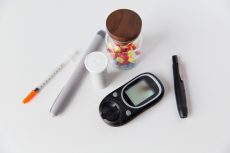 Men who sleep either fewer or more hours than average may face a greater risk of developing diabetes, according to a new study.

More than 29 million people nationwide have diabetes. Meanwhile, during the last 50 years, the average self-reported sleep duration for individuals has decreased by as much as 2 hours.  During that same period of time, the prevalence of diabetes has doubled.

“In a group of nearly 800 healthy people, we observed sex-specific relationships between sleep duration and glucose metabolism,” said the study’s senior author, Femke Rutters, PhD, of the VU Medical Centre in Amsterdam, The Netherlands. “In men, sleeping too much or too little was related to less responsiveness of the cells in the body to insulin, reducing glucose uptake and thus increasing the risk of developing diabetes in the future. In women, no such association was observed.”

The study examined the sleep duration and diabetes risk factors in 788 people. The researchers analyzed a subset of participants in the European Relationship between Insulin Sensitivity and Cardiovascular Disease (EGIR-RISC) study, who were healthy adults ranging in age from 30 to 60 years old. Study participants were recruited from 19 study centers in 14 European countries.

Researchers measured the participants’ sleep and physical activity using a single-axis accelerometer, a device to track movement. To assess the risk for diabetes, researchers used a device called a hyperinsulinemic-euglycemic clamp to measure how effectively the body used the hormone insulin, which processes sugar in the bloodstream.

The study found that men who slept the least and the most were more likely to have an impaired ability to process sugar compared to men who slept an average amount, about seven hours. The men at either end of the spectrum had higher blood sugar levels than men who got the average amount of sleep.

The study is the first to show opposite effects of lost sleep on diabetes risk in men and women. The authors theorized this may be a result of the study population being made up of healthy individuals, rather than those at risk of developing diabetes. The researchers also measured insulin sensitivity and sleep with more sensitive devices than past studies.

“Even when you are healthy, sleeping too much or too little can have detrimental effects on your health,” Rutters said. “This research shows how important sleep is to a key aspect of health – glucose metabolism.” medicine, diabetes and health care concept – close up of glucometer, insulin pen, drug pills and other diabetic tools on table

Next:
Study: Tuesday is the Best Night for Sleep