U.S. Students are Sleepiest in the World 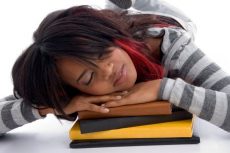 Despite what you think about the condition of schools in the United States, they are top ranked for one thing: sleepiest students.

According to recently released research, nearly three quarters of nine and 10-year-olds suffer academically due to poor sleep, and 80% of 13 and 14-year-olds are affected by lack of sleep.  That compares very poorly to the worldwide average of 47% and 57%, respectively.

The top 5 countries in terms of poor sleep hampering learning are:

On the other end of the scale, students are least affected by lack of sleep in Kazakhstan, followed by Azerbaijan, Slovakia, Japan, and Malta.

The findings were part of a 2011 study that gauged education benchmarks around the world. In order to assess how sleep and nutrition affected these results, Boston College researchers sent questionnaires to teachers, students and parents about students’ sleep habits. Those responses were then compared with test performance. The results of the new comparison have not been published in a peer-reviewed journal.

The low level of Z’s in affluent countries like the U.S. and Saudi Arabia are attributed to students’ constant attachment to their cell phones and tablet computers.  The light from the screen, held close to the face, makes it harder to fall asleep.

Previous:
Scientist’s Work May Lead to a Test for Sleep Deprivation