Wear Your Sunglasses at Night, and Sleep Better 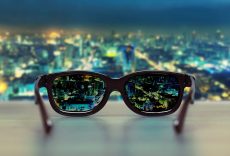 Maybe Corey Hart had it right all along, even if he didn’t know it.  A sleep researcher says that if you have trouble sleeping, try wearing sunglasses for a while before bed.

“We have artificial sources of light available to us 24 hours a day,” said researcher Glenn Landry, who studies sleep as a postdoctoral research fellow at the University of British Columbia.

“We’ve got our laptops with us, and we’re doing email and we’re watching TV late at night. And so we’re getting light at night [which] impacts our circadian rhythms, our daily biological rhythms.”

And Landry does more than just talk the talk.

“Beginning at eight at night, two hours before [the] time I want to go to bed, I wear sunglasses. Not because my future’s so bright, but because I’m trying to avoid light. I’m trying to tell my clock that this is the end of the day,” he said.

Avoiding light at night is only half of the battle. People who don’t get enough light exposure during the day are also missing out on important cues to the brain.

“And the long-term impact of that hasn’t really been evaluated,” said Landry. “But it can’t be good for us and it’s probably leading to increased circadian dysregulation.”