What Fruit Flies Can Tell Us About Our Body Clocks 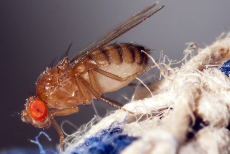 Humans and fruit flies may have not shared a common ancestor for hundreds of millions of years, but the neurons that govern our circadian clocks are strikingly similar.

Now, University of Michigan researchers have made a discovery in fruit flies that may teach us a little more about our own sleep cycles. Using the fruit flies, they showed how circadian clock neurons use thermoreceptors to constantly monitor the temperature of their environment. They found even mild changes in temperature have physiological effects on clock neurons that control sleep timing.

This discovery will help researchers understand how neurons are using environmental temperature in addition to light to regulate sleep timing in mammals, including humans.

“Decades of work from recent Nobel Prize winners and many other labs have have actually worked out the details of how light is able to adjust the clock, but the details of how temperature was able to adjust the circadian clock were not well understood,” said Swathi Yadlapalli, first author of the study and a postdoctoral researcher in the U-M Department of Molecular, Cellular and Developmental Biology.

“Going forward, we can ask questions of how these two stimuli are processed and integrated into the clock system, and how this has effects on our sleep behavior and other physiological processes.”

Circadian clocks are biochemical mechanisms that allow living things to organize their sleep and waking across the 24-hour cycle of a day. Researchers know that circadian clocks in mammals control the internal body temperature to drive sleep patterns, says Orie Shafer, principal investigator of the study. For example, we think of the human body temperature as a steady 98.6 degrees, Shafer said, but actually, our body temperature changes throughout the day.

“In fact, it’s fluctuating,” Shafer said. “The circadian system produces a daily rhythm in temperature which is an important cue for when it’s time to go to sleep.”

To study how the fruit fly neurons responded to external temperature, Yadlapalli worked with Chang Jiang, a postdoctoral researcher in the labs of Pramod Reddy and Edgar Meyhofer of the U-M Department of Mechanical Engineering. Together, they developed an optical imaging and temperature control system that enabled them to take a snapshot of neural activity in the circadian clock network of fruit flies when the flies are exposed to heat or cold stimulus.

Previous:
Does Sleep Keep our Brains Limber and Flexible?

Next:
Football Can Lead to Sleep Apnea