Why Can’t We Put Our Phones Away and Sleep in Peace? 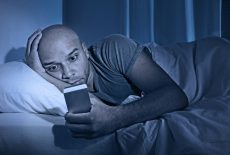 One of the easiest things you can do to sleep better is to put your smartphone away about an hour before bed, and keep it away while you’re sleeping.  The problem is that far too many of us can’t seem to do that.

New research from Common Sense found that a staggering 68% of teens and 74% of parents now take their mobile devices to bed with them, and 29% of teens actually sleep with them in their bed. More than a third of teens and more than a quarter of parents wake up during the night to check the devices for something other than the time.

The study surveyed 1,000 teens and parents in the United States and is the second wave of ongoing research by the organization to understand mobile device use by parents and teens and to surface attitudes and concerns about how the technology is affecting family relationships.

Some other key findings include:

“At a time when the research community is raising alarms about the health consequences of inadequate sleep, this new research from Common Sense provides yet another proof point of the many ways that our use of technology can impact our health and well-being and how technology is rapidly changing the family dynamic,” said James P. Steyer, founder and CEO of Common Sense. “If technology harms our health and relationships, we need to change our ways. It’s as simple as that.”

Next:
Quality of Sleep, Not Quantity, Linked to Health in Teens