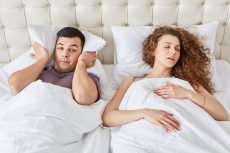 A new study of adults who were referred for evaluation of a suspected sleep disorder suggests that women tend to under-report snoring and underestimate its loudness.

“We found that although no difference in snoring intensity was found between genders, women tend to under-report the fact that they snore and to underestimate the loudness of their snoring,” said Nimrod Maimon, MD, MHA, principal investigator and professor at the Ben-Gurion University. “Women reported snoring less often and described it as milder.”

According to the authors, there is a social stigma associated with snoring among women. Therefore, women may not reliably answer questions about snoring, which may contribute to the under-diagnosis of obstructive sleep apnea in women.

“The fact that women reported snoring less often and described it as milder may be one of the barriers preventing women from reaching sleep clinics for a sleep study,” Maimon said.

Maimon added that health care providers who are screening women for suspected obstructive sleep apnea should consider other factors in addition to self-reported snoring. For example, women with sleep apnea may be more likely than men to report other symptoms such as daytime fatigue or tiredness.

Previous:
A Little Lost Sleep Can Put Your Job at Risk

Next:
Study Says Insomniacs Less Able to Get Over Past Mistakes