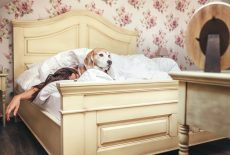 They say dogs are man’s best friend, but according to new research, they’re a woman’s best bed partner.

According to recent research conducted by animal behaviorist, Christy Hoffman, PhD, women report that canine companions are better bed partners than humans.  They’re also better than cats, by the way.

Dogs’ sleep patterns more closely coincide with sleep patterns in humans than do the sleep patterns of cats, which may explain why dog moms stick to a stricter sleep schedule.  Dogs who slept in their owners’ beds were perceived to be less disruptive for sleep than human partners and cats. Additionally, dogs as bed partners scored higher on comfort and security than human and feline bed partners

When it comes to sharing a bed with humans and felines, the results were far less soothing. Cats who slept in their owners’ beds were reported to be equally disruptive for sleep as human partners and cats were associated with weaker feelings of comfort and security than both human and canine bed partners.