Your Car’s Vibrations Are Making You Sleepy 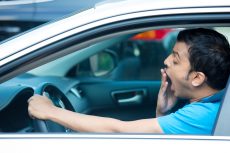 It’s a well known parenting trick: if your kid won’t sleep, take them for a ride in the car.  There’s something about the vibrations of a car ride that just helps children sleep.  The problem is, new research indicates those vibrations are doing the same thing to the driver.

With about 20-percent of fatal road crashes involving driver fatigue, researchers from RMIT University in Melbourne, Australia, hope their findings can be used by manufacturers to improve car seat designs to help keep drivers awake.

Professor Stephen Robinson said the effects of physical vibration on drivers were not well understood, despite growing evidence that vibration contributes to feelings of sleepiness.

“We know 1 in 5 Australians have fallen asleep at the wheel and we know that drowsy driving is a significant issue for road safety,” Robinson said.  “To improve road safety, we hope that future car seat designs can build in features that disrupt this lulling effect and fight vibration-induced sleepiness.”

Led by chief investigators Associate Professor Mohammad Fard and Professor Stephen Robinson, the research team tested 15 volunteers in a simulator that replicates the experience of driving on a monotonous two-lane highway.

The simulator was set up on a platform that could be vibrated on different frequencies, with the volunteers tested twice – once with vibrations at low frequencies (4-7Hz) and once with no vibration.  The tiredness induced by vibration makes it psychologically and physiologically harder to perform mental tasks, so the body’s nervous system activates to compensate, leading to changes in the heartbeat.

By looking at the volunteers’ heart rate variability (HRV), researchers were able to gain an objective measure of how drowsy they were feeling as the 60-minute test progressed.  Within 15 minutes of starting the vibrating test, volunteers were showing signs of drowsiness. Within 30 minutes, the drowsiness was significant, requiring substantial effort to maintain alertness and cognitive performance.

The drowsiness increased progressively over the test, peaking at 60 minutes.

Associate Professor Mohammad Fard said more work was needed to build on the findings and examine how vibrations affected people across different demographics.  He also said that they learned that it’s possible vibrations of other frequencies could be used to have the opposite effect — waking people up.

Next:
Being an Early Bird Can Make You Happier