Astronaut Use of Sleep Aids is Sky High 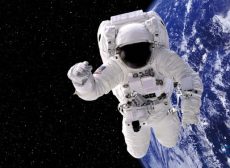 There’s no way around it — space flight is stressful.  Between the cramped quarters and the sheer danger of the exercise, it’s enough to give anyone insomnia.  However, according to a recent study, the use of sleep aids both before and during space flight is astronomical.

Crew members continuously wore a small, light-weight device that recorded activity and data for light exposure. Crew members also kept a log of daily sleep and medicine use. The researchers used a standard algorithm to analyze data on more than 4000 nights of sleep on the ground before and after space flight and on more than 4200 nights in space among 85 astronauts (64 on Space Transportation System shuttle missions and 21 aboard International Space Station, or ISS, missions) before, during, and after spaceflight.

NASA schedules 8.5 hours of sleep per night for crew members in spaceflight. Quiet and darkened “sleep stations” have been installed on the ISS.
Researchers found that sleep time averaged about six hours for shuttle and ISS missions. Sleep time was about the same before these missions.
This prelaunch sleep deficiency is similar to sleep loss often reported with stress before important events, such as exams, athletic events, or difficult work, the authors note.

What caught the researchers’ attention was that about three quarters of shuttle crew members reported taking sleep-promoting drugs in-flight. Use of such drugs was reported on about half of the in-flight shuttle nights. Two doses of sleep drugs were taken on 17% of 500 nights on which such drugs were taken.  Zolpidem was the most frequently used drug on shuttle missions.

Unfortunately, the astronauts didn’t get much relief from all of these drugs.  The sleep aids increased sleep efficiency on average by only 1.3%.

The marginal benefit offered by sleep aids should be balanced against the risks of hypnotic drugs, which can include reduced performance while operating spacecraft, said the authors.

Previous:
Research: Sleep Aids and Wake Aids Might Not Work

Next:
What City is the Most Sleepless in the World?