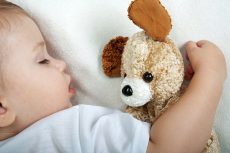 New first-of-its-kind research from Germany shows that babies build their episodic memory when they nap. What this means is that they are able to remember the details of their individual experiences after napping.

The scientists examined this relationship using a three-phase study. During the learning phase, the 14 to 17-month-old children in the study were shown pictures of objects whose names they already knew, containing different cars, balls or dogs. They then heard the appropriate name for each picture. One group of the children spent the following one to two hours sleeping, while a second group stayed awake. In the subsequent test phase, the researchers showed the young participants different pictures again, including those that they had already seen in the learning phase as well as new cars, balls and dogs. Each object was once named correctly and once incorrectly. During all phases of the experiment, the researchers recorded the baby’s brain activity using the electroencephalogram (EEG).

The analysis of the EEG activity made it clear: The brain of the children who had slept responded differently in the memory test than that of those who stayed awake – but only in certain cases. If the researchers presented the babies with a ball that they had never seen before and called it a car, the brain responses initially did not differ. In both groups, the so-called N400 component appeared, which occurs when the brain processes inappropriate meanings. The children obviously knew that a ball is not a car.

It was different, however, when the babies viewed a ball from the learning phase and it was called a car. The group that had stayed awake again showed the N400 component, while the group that had slept did not. In the children who had napped, the researchers observed a brain response that was triggered when a ball from the learning phase was again correctly named as such. However, this response did not occur when a new ball was called a ball. The researchers concluded: After sleep, the babies no longer understood the object-word pairs they had previously experienced as naming a meaning. Rather, they recognized them as individual episodes. Object and word were thus merged into a unified event in the memory.

“The results show that sleep not only enables the infant brain to generalize individual experiences, but also to preserve individual experiences in detail and to differentiate them from existing general knowledge,” explains first author Manuela Friedrich, researcher at the MPI CBS and HU Berlin. She further hypothesizes: “The fact that a recognized object-word episode is not understood as referring to general knowledge means that its details can be protected from mixing with existing memory.”

The results are also interesting with respect to the so-called infantile amnesia, i.e. the phenomenon of not being able to remember one’s own early childhood experiences. It has often been assumed that very young children are not yet capable of forming longer-term episodic knowledge. However, the current findings clearly show that even babies can remember events in detail – and sleep contributes significantly to this.

Next:
Does Obesity Actually Lead to Sleep Loss?