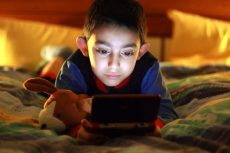 Technology like televisions, video game systems, computers and cell phones in a child’s bedroom can reduce the amount of sleep that child gets and increase the chance she will be overweight.  That’s the finding of a new study from Canada published recently in  the journal Pediatric Obesity.

For the study, conducted with fifth graders in Alberta, nearly 3,400 students were asked about their nighttime sleep habits and access to electronics.  It was found that half of the students had a TV, DVD player or video game console in their bedroom, 21-percent had a computer and 17-percent had a cellphone. Five percent of students had all three types of devices.

More than half (57-percent) of students reported using electronics after they were supposed to be asleep, with watching TV and movies being the most popular activity. More than one quarter used or watched three or more activities after bedtime.

Researchers found that students with access to one electronic device were nearly one-and-a-half times as likely to be overweight as kids with no devices in the bedroom. The proportion increased to two-and-a-half times for kids with three devices, with similar results reported among obese children.

Previous:
How Are Lack of Sleep and Weight Gain Linked?

Next:
Teen Athletes Who Don’t Sleep Enough are More Likely to Get Injured