How Are Lack of Sleep and Weight Gain Linked? 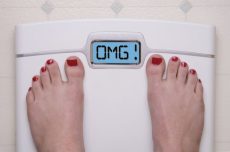 It’s not news that there’s a higher chance of obesity among those who don’t sleep enough, but scientists now are working toward finding out why.

In a small study published recently in the Annals of Internal Medicine, researchers found that not getting enough sleep hurts the ability of fat cells to respond to insulin efficiently.  Fat cells safely store lipids. But when the cells fail to adequately respond to insulin, lipids can spill out into the bloodstream and surrounding tissue. This state of insulin resistance or “metabolic syndrome” is often a precursor to Type 2, or adult-onset, diabetes. Participants in the study who on four nights were in bed for 4½ hours had fat cells that were 30-percent less responsive to insulin than the cells were after four nights of 8.5 hours in bed.

Researchers conducting the study said after just a handful of nights of getting less than five hours of sleep per night, the metabolic age of the test subjects (who had an average age of 23) increased by upwards of 10 to 20 years.

Researchers cautioned that this is a small study, and that more work is needed to fully understand the results they’ve received thus far.

Next:
Bedroom Technology Not Good for Childhood Sleep