Exercise at Night is Okay for Sleep 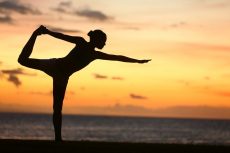 Feel free to exercise at night if that’s when you have the time.  It won’t impact your sleep.  That’s the result of new research conducted at Arizona State University.

Researchers analyzed data from the 2013 National Sleep Foundation Sleep in America Poll, which surveyed 1,000 adults about their exercise patterns, including what time of day and how hard and how often they pushed themselves. They were also asked how well they felt they slept, how long it usually took them to doze off, and whether they woke up feeling refreshed.

While morning exercisers reported the best sleep overall, there was zero difference in sleep quality between people who worked out within four hours of going to bed and those who sat on the couch all evening.

It should be noted that researchers did not compare those who worked out in the last four hours before bed and those who didn’t exercise at all.  They say, however, that they feel they’ve proven that exercise at any point in the day helps lead to a good night’s sleep.

Next:
Study: Prescription Sleeping Pills Can Shorten Your Life