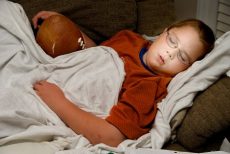 Families that value and prioritize sleep are less likely to raise obese kids.  That’s the word from a new study conducted at the University of Illinois.

The study, published in Frontiers in Psychology, examined the sleep routines of 337 US preschool children and their families, taking into account socioeconomic characteristics and observing the influence of TV time and meal routines.

During the study, researchers actually looked at four different factors in childhood obesity, including limited TV time, not having a bedroom TV, quality family meal time and adequate sleep.  What they found, though, was that sleep was the only factor that made a difference in the results.

Children in the study who slept 10 hours per day or more were less likely to suffer obesity than those who did not, regardless of the other routines.

What they also found was that parents who didn’t sleep enough children who did the same and were therefore more likely to be overweight.

Scientists have learned more over the last few years about the link between lack of sleep and obesity.  They’ve found that those who don’t sleep enough tend to eat more, and thus become overweight.