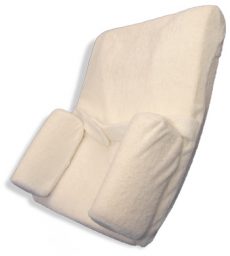 Two government agencies are warning parents and other caregivers not to put babies in sleep positioning products as two recent deaths underscore concerns about suffocation.

The Food and Drug Administration (FDA) and the Consumer Product Safety Commission issued the warning after reviewing reports of 12 known infant deaths associated with the products.

The most common types of sleep positioners feature bolsters attached to each side of a thin mat and wedges to elevate the baby’s head. The sleep positioners are intended to keep a baby in a desired position while sleeping. They are often used with infants under 6 months old.

In the last 13 years, the federal government has received 12 reports of babies known to have died from suffocation associated with their sleep positioners. To reduce the risk of Sudden Infant Death Syndrome (SIDS), the American Academy of Pediatrics recommends infants be placed to sleep on their backs on a firm surface free of soft objects, toys, and loose bedding.

Most of the babies suffocated after rolling from the side to the stomach.  In addition to the deaths, the commission has received dozens of reports of babies who were placed on their back or side in the positioners only to be found later in hazardous positions within or next to the product.