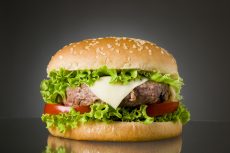 It’s well established that people who are sleep deprived eat more, and thus gain more weight.  But, new research shows that it might not be the food they crave, but rather the food odors.

Sleep deprivation seems to increase the brain’s sensitivity to food smells, researchers reported at the recent Cognitive Neuroscience Society’s annual meeting in San Francisco. That might make snacks more enticing — helping explain why people who burn the candle at both ends tend to eat more and gain weight.

Adults operating on only four hours of sleep inhaled food odors such as those from potato chips and cinnamon rolls, and nonfood smells like fir trees while undergoing functional MRI scans. (The scientists carefully controlled participants’ food intake throughout the day.) A few weeks later, the same participants repeated the experiment — this time with a full eight hours of sleep.

When tired, participants showed greater brain activity in two areas involved in olfaction — the piriform cortex and the orbitofrontal cortex — in response to food smells than they did when well rested. That spike wasn’t seen in response to nonfood odors, says study coauthor Surabhi Bhutani, of the Northwestern University Feinberg School of Medicine in Chicago.

Though preliminary, the results fit with previous research showing a link between sleep deprivation and both excessive calorie consumption and weight gain.