“Games Flu” Comes From Too Much Sports, Not Enough Sleep 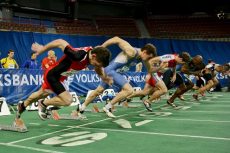 Doctors across the globe are seeing seeing symptoms of a new (albeit unofficial) illness that’s been dubbed the “Games Flu”.

This summer saw an incredible amount of sporting events coming one after another.  First it was Wimbledon, then the Tour de France, and then the Olympics.  Here in the U.S. we also have the beginning of the NFL preseason following those three.  All of these sporting events around the world have created an incredible temptation to stay up late … and now we’re paying for it.

According to a survey in Australia, 44% stayed up late or got up early to watch tennis, cycling, or the myriad of sports from the Summer Games.  Of those who who cut their sleep to watch sports, more than half reported to have suffered from some kind of cold or flu symptoms.

It’s well known that lack of sleep can lower your immune response.  A prolonged period of not enough sleep can many times lead to illness.  The only way to get your body back in order is a prolonged period of good sleep.  A better policy would be to prioritize sleep over sports — setting your DVR to record your favorites and watch them at a time when you’re not reducing your sleep, or just accepting the fact that you can’t see everything you want to see.

Previous:
Sleep Position and Your Personality

Next:
Sleeping in Two Segments May be More Natural