Lack of Sleep Can Make You Weepy 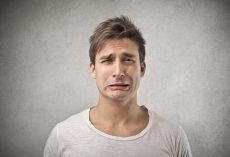 We often joke about being sleep deprived turning you into a “zombie” but new research shows the exact opposite.

The research, from Nova Southeastern University in Ft. Lauderdale, Florida, examined the emotional response of subjects before and after being sleep deprived.  After a good night’s sleep, the subjects were shown images of items.  While looking at the images, the subjects were hooked up to a machine that monitors brain activity.  The subjects repeated the exam after being kept awake for a full 24-hours.

In both tests, the subjects’ brains showed a highly emotional response to images such as a puppy, a happy baby, a bloody finger, a black eye and a gun. But, the sleep deprived subjects showed an equal amount of emotion to things that we wouldn’t normally expect to evoke emotion, such as a coffee cup, a pencil, grass and a stop sign.

The scientists who conducted the study said it’s clear that when you’re sleep deprived, the part of the brain that processes emotion is activated and is difficult to turn off.

The study findings were recently presented at a Society for Neuroscience conference.

Next:
Sleep and Reading: A Formula for a Healthy Mind