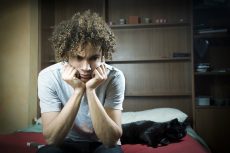 Preliminary results from a new study suggest that there is a relationship between insufficient sleep and mental health symptoms in collegiate students.

Results show that in adjusted models, insufficient sleep was associated with all mental health variables. With every additional night of insufficient sleep, the risk of experiencing mental health symptoms increased on average by more than 20% – including an increased risk of 21% for depressed mood, 24% for hopelessness, 24% for anger, 25% for anxiety, 25% for desire to self-harm, 28% for functional problems, and 28% for suicidal thoughts.

Data were aggregated from the 2011-2014 waves of the National College Health Assessment, conducted by the American College Health Association. The analysis involved 110,496 individuals who provided complete data. Insufficient sleep was assessed as the number of nights students did not “get enough sleep so that you felt rested when you woke up.” Mental health symptoms were assessed as the presence of symptoms in the past 30 days. Adjusted models controlled for age, sex, race/ethnicity, and survey year. Additional models included controls for insomnia and depressed mood.

“The fact that sleep health was so strongly related to mental health is important since the majority of college students don’t get the recommended amount of sleep needed for optimal health and functioning,” said senior author Michael Grander, Ph.D., advisor to Ramsey and director of the Behavioral Sleep Medicine Clinic at the University of Arizona. “So, these young adults aren’t sleeping enough, and not only does that increase their likelihood for things like worse academic performance and health, but it also takes a toll on their mental health as well.”

According to the authors, mental health efforts on campuses should focus on achieving sufficient sleep.

The American Academy of Sleep Medicine recommends that adults 18 years and older should sleep 7 or more hours per night on a regular basis to promote optimal health. However, insufficient sleep is common among college students, and especially among those who are athletes. A previous study of collegiate athletes at one university found that 39% regularly slept less than 7 hours on weeknights.

Previous:
Poor Sleep and Poor Nutrition May Be Linked

Next:
California Group Fights to Save Standard Time