Mobile Phones in the Bedroom Still a Problem 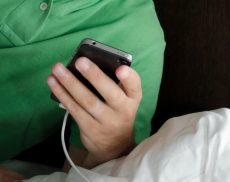 For years, we’ve published articles here at SleepBetter that warn about having smartphones and tablets turned on in the bedroom while it’s sleep time (a search on SleepBetter for “smartphones” uncovers quite a few of them) but a new survey indicates that it’s still a widespread practice.

According to the survey, conducted by the UK regulatory and competition authority for the broadcasting, telecommunications and postal industries, called Ofcom, a full 80-percent of us now keep our mobile phones on at night and in the bedroom.  About half of us use our smartphones as alarm clocks.

Obviously there are a number of problems with this.  First, the light from the screens can invade a darkened room, and light from smartphones has been known to be a trigger for human brains that it’s time to wake up.  Second, noises from smartphones can obviously disrupt sleep.  Finally, having a smartphone nearby can tempt us to check email, texts, and even Facebook and Twitter when we should be sleeping.  In fact, sleep experts have been seeing a higher and higher number of “sleep texting” cases.

So, what can be done?  Obviously, the easiest thing to do is check your phone at the bedroom door.  Keep it in another room.  If you must have it in your room while you’re sleeping, turn all sounds off.  Even the vibrate feature on some phones is aggressive enough to wake light sleepers.  If you MUST use your phone as an alarm clock (you’re better off spending a little money on a cheap alarm clock), turn the brightness down on your phone’s screen or, better yet, put it face down on your bedside table.