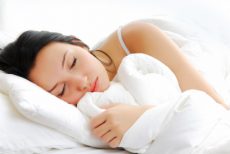 What’s going on during REM (rapid eye movement) sleep has been a mystery to scientists ever since they started examining what happens when we’re slumbering.  Due to new research, however, the veil may finally be lifted on this period of heightened brain activity that happens while we slumber.

One of the hallmarks of REM sleep is that our eyes appear to be flitting from side to side, as if following motion.  Although scientists have long suspected that our eyes move in response to what our unconscious mind sees in our dreams, no one has been able to prove it.  Now, an international team of researchers is the first to demonstrate that during dreams, our eyes and brains respond similarly to how they react to images when we’re awake.

The researchers implanted electrodes deep into the brains of 19 people with drug-resistant epilepsy at Ronald Reagan UCLA Medical Center in order to identify the origin of their seizures prior to surgery.  For up to two weeks, the electrodes recorded the electrical activities of individual neurons in the medial temporal lobe, the bridge between visual perception and memories, allowing the scientists to eavesdrop on the patients’ dreams.

When the researchers reviewed the data from the electrode recordings, they saw something unexpected in the responses of single brain cells during REM sleep.  Brain cells in the medial temporal lobe showed a sudden surge of activity each time patients moved their eyes in REM sleep.  That surge of activity was found to be similar to what happens when a brain sees something for the first time while awake.

Future research will aim to decode dream content based upon brain cell activity.

Next:
The Science of Waking Up is Actually Pretty Simple