Nicotine Worse than Alcohol or Caffeine for Sleep 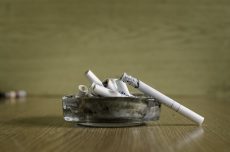 A new study that reviewed the sleep habits of African-Americans found that using nicotine nightly is worse than having a nightcap or drink with dinner, or even having a caffeinated beverage at night.

A study led by a researcher at Florida Atlantic University with collaborators from Brigham and Women’s Hospital, Harvard T. H Chan School of Public Health, Harvard Medical School, Emory University the National Institutes of Health, and the University of Mississippi Medical Center, is one of the largest longitudinal investigations to date to examine evening consumption of alcohol, caffeine and nicotine among African-Americans with objectively measured sleep outcomes in their natural environments.

Using actigraphy (wrist-watch-like sensor) and concurrent daily sleep diaries, the researchers examined the night-to-night associations of evening use of alcohol, caffeine and nicotine on sleep duration, sleep efficiency and wake after sleep onset. The study involved 785 participants and totaled 5,164 days of concurrent actigraphy and daily sleep diaries that recorded how much alcohol, caffeine or nicotine they consumed within four hours of bedtime.

Results of the study may be good news for coffee lovers. The researchers did not find an association between consumption of caffeine within four hours of bedtime with any of the sleep parameters. However, the researchers warn that caffeine dosing, and individual variations in caffeine sensitivity and tolerance, were not able to be measured and can play an important role in the association between caffeine use and sleep.

For smokers and those who enjoy “Happy Hour” or an alcoholic beverage with dinner, the study shows that a night with use of nicotine and/or alcohol within four hours of bedtime demonstrated worse sleep continuity than a night without these substances, even after controlling for age, gender, obesity, level of education, having work/school the next day, and depressive symptoms, anxiety, and stress.

Nicotine was the substance most strongly associated with sleep disruption and yet another reason to quit smoking. There was a statistically significant interaction between evening nicotine use and insomnia in relation to sleep duration. Among participants with insomnia, nightly nicotine use was associated with an average 42.47-minute reduction in sleep duration. The effects of nicotine may be particularly significant among individuals with insomnia.

The results from this study are especially meaningful as they were observed in individuals unselected for sleep problems and who generally had high sleep efficiency. Moreover, they were based on longitudinal data so that the associations can take account of not only between-person differences but also within-person variations in exposures and covariates such as age, obesity, educational attainment, having work/school the next day, and mental health symptomatology.

“African Americans have been underrepresented in studies examining the associations of nicotine, alcohol, and caffeine use on sleep,” said Christine E. Spadola, Ph.D., lead author and an assistant professor in FAU’s Phyllis and Harvey Sandler School of Social Work within the College for Design and Social Inquiry. “This is especially significant because African Americans are more likely to experience short sleep duration and fragmented sleep compared to non-Hispanic Whites, as well as more deleterious health consequences associated with inadequate sleep than other racial or ethnic groups.”

Next:
Sleep Disruption Among Biggest Downsides to Social Media