For Kids, Nighttime Sleep is Genetic, But Naps are Environmental 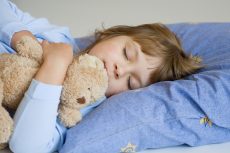 A Canadian research team has come up with some interesting findings about toddler sleep.

The research, conducted at the University of Montreal and published in the journal Pediatrics found that nighttime sleep for youngsters is controlled by genetics, but environmental factors seem to have more of an impact on the length of daytime naps.

Researchers asked parents of 405 identical and 586 fraternal infants born in the Montreal area to answer questions about daytime and nighttime sleep habits at the ages of six months, 18 months, 30 months and 48 months.  At most ages, genetics accounted for between 47 and 58-percent of nighttime sleep duration. The majority of children slept 10 or 11 continuous hours at night.  The exception was nighttime sleep at 18 months, which the researchers called “a critical environmental time-window” for establishing sleep patterns.

On the other hand, genes never explained more than about one-third of daytime nap time.  Environmental factors like family routines accounted for between 33 and 79 per cent of whether or not twins napped and for how long.

The Quebec researchers said the study needs to be repeated with more exact measurements of sleep, such as movement sensors or sleep lab experiments.