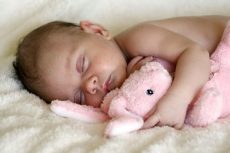 Infant sleep machines, or white noise machines, are a godsend for parents of light-sleeping children or children who have to sleep in a noisy environment.  But, a new study is warning about their use.

The popular devices promise to help infants stay asleep by lulling them with white noise, such as flowing water, a heartbeat, or a sound that resembles a vacuum cleaner.  But, in tests of 14 sleep machines, researchers found some were capable of decibel levels that surpass the limit recommended for workplace noise. All were capable of breaking the noise limit recommended for hospital nurseries.

The investigators found that, at top volume, three of the devices they looked at would expose a baby to more than 85 decibels if it were set on the crib rail.  That’s the decibel limit set for workplace noise.  All of the machines they checked were capable of churning out more than 50 decibels, which is the noise limit recommended for hospital nurseries. Nearly all could top 50 decibels even from across the room.

Researchers are recommending that manufacturers meet a safe sound limit, but until that happens they suggest that parents keep the volume low and place the machines away from cribs.  They said, however, that there is nothing wrong with using the machines at a low level all night.